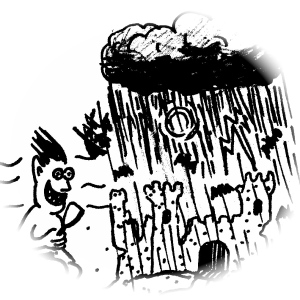 And Then Things Got Weird….

By the Sea (from Shark Fin Soup) 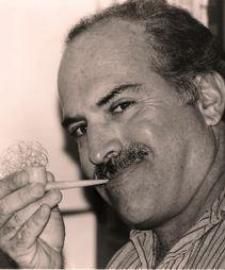 The warm morning sun shimmered upon the rippling sea. A nice sized coconut bobbed up and down just past the surging shoreline and a few yards past the black skinned, golden haired, fifteen-year-old Mmbop Handsun, the prince of his own itsy-bitsy teenie-weenie Micronesian kingdom.

It was going to be another hot one, and Mmbop had forgotten his newest pair of certified-previously-owned Ray-Ban sun glasses given to him, in trade, by a rich tourist woman for one of his prized wood carvings — carvings that he ordered, weekly, from what he thought were poor dumb hard-working saps over in Malaysia. He did not realize that the Malaysians had been outsourcing the genuine Fijian carvings to a sweaty warehouse in Alabama, USA, that employed the children of ex auto workers. Mmbop only paid twenty-five cents apiece for the crude art. Yesterday he’d sold ten oversized one-hundred dollar wooden cannibal forks that his father, the Chief, Papaumaumau, had ordered from Taiwan at 50 cents apiece. It had been a good week, now that he’d also helped his parents decimate and sell off most of the island’s remaining palm trees to the Chinese.

As if any drunken tourist would even notice, there was hardly a substantial palm tree left on any of the High Society Islands within three hundred miles. Coconuts were scarce on both Little Hubba, and Big Hubba-Hubba, the two islands comprising the kingdom of Hubba Hubba Hubba.

“Shouldn’t waste perfectly good food!” Mmbop said, as he pushed his thick blonde dreadlocks back. The golden hair and clear blue eyes were a throwback to his Scandinavian sailor ancestors who’d visited, mated and had been munched on, in Micronesia over seven hundred years ago.

Mmbop lifted himself up, stretching his long thin shadow across the beach.

After eating the sweet coconut meat he would clean off the husk and carve a bearded monkey head for the dwindling tourists that have been disappearing along with the trees. Maybe he’d add a human finger bone through the nose.

Tourists always assumed that the “nose-bone” came from a chicken. Chickens were revered as Gods in Hubba-Hubba. They were only used for their eggs, by order of Queen Erica, after the island’s omelet loving priests had convinced her that the chicken fruit were a gift from Lomalagi (Heaven) and that ‘the sacred chickens, DID, in fact, come before the eggs.’

He watched the coconut bobbing in the water. After the carving was finished, he would add some shell teeth and toy glasses.

Tourists love that stuff, Mmbop thought as he bent forward, and tried to grab onto the bobbing nut that persisted on floating away in the slow current and morning glare. He hit at the coconut with a stick and it turned over. It appeared to have already been carved with a funny beard and a big schnozolla with a human bone through it!

It, of course, was a real human head.

Mmbop scooped it out of the surf and carried it to shore.

Granola grinding, hemp wearing, coral hugging tourists don’t want a real human head, he thought. Not even a fresh one like this. Maybe I should toss it back? He shook his head ‘no.’ I shouldn’t waste a perfectly good head. He decided to ‘fix it up’ with a few artful cuts. He reached into the pocket of his Izod swimsuit, which yet another rich tourist had traded him for a necklace of genuine plastic whale teeth, and grabbed his Swiss Army Cannibal Fork, that came complete with a saw blade, a grater, a marital aid, assorted knives, an Egyptian nose hook (for removing brains), a Phillips screwdriver, and a waterproof universal remote.

At home, waiting for him, was his main squeeze, Mmbopalula.

“Maybe I’ll take it to her as a gift.…Besides, nothing turns a woman on like a full head of hair.”