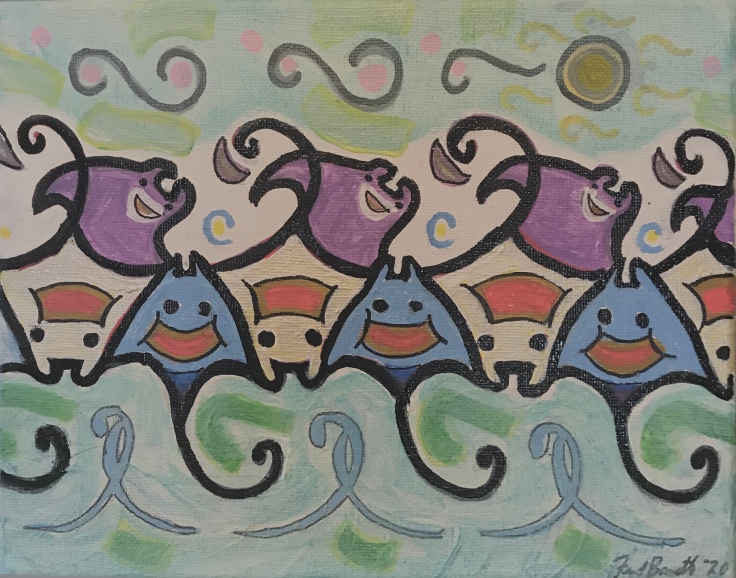 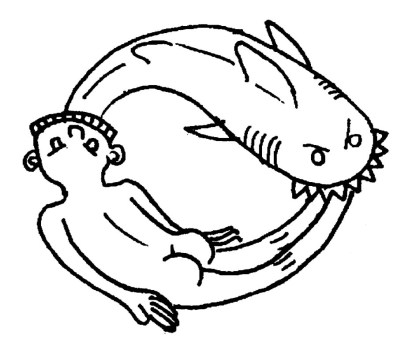 “SHUT THE באַרען up, לאָך WAFFLE!” screamed queen Dauna, shocking the tourists on their way back to Nyah-Wassup Dock, some of whom dropped their free cups of Outtamywayasshole Coffee. “Oh, sorry, all. That was my morning Tourette’s speaking. What I meant to say was ‘Shut the באַרען up, לאָך waffle!’”

“No offense taken, my queen,” said the crone, Lupta.

The crowd were now focused on Bernie’s terrible choice of Bermuda shorts, as if they were rubber-necking the scene of a tragic car wreck.

“P’leeeeease. Fruit?” asked Dauna. “You know that I pass out at the sight of juice. That slob? Really? Dauna’s curiosity about Bernie had been aroused. My ampullae of Lorenzini (sharkie sensing organs) have never felt like this, she thought as her rear / tail end began to sway.

Bernie, in return, could not take his eyes off of her anxious shifting legs beneath her lucky parreo. Lucky? Why did I think the parreo was lucky, as if it were somehow alive? He watched ‘Her Heinous’ draw down an entire cigarette in a single breath while she took an uncomfortable, yet thrilling inventory of the silly human. Her deep brown eyes seemed to go ‘click click click.’

Dauna was beautiful and she was looking at — him!

Wanting a snapshot of his own, Bernie lifted his new Nikon and aimed. The camera flared, fell and melted in the sand. The insatiable shark goddess queen began to circle the hypnotized tourist. Bernie had a feeling that either he was going to be eaten by, or married to the captivating queen. Same damned thing.

Dauna’s spell was broken when the captain of the dive boat called the tourists back on board. Bernie’s heart was racing as he turned for one last look. The sultry queen of Kupaio was gone.

She’d driven off, upset about her future.

Every so often, in the silence of night, a mysterious breeze carrying the name “Bernie” would gently jingle the chimes of Dauna’s fun foyer. “Berrrrrnie. Berrrrrrrrnie.”

(Sad violin music.) But forsooth, dear readers, for after Bernie had left the island, Dauna was to be married.

…to a gold-plated schmuck-with-fins named Bunji.

Dauna, upset, drove off in her golf cart, running into some stuff along the way.

This is T.K. Betelnut,  Interpol agent in charge of the TPN

Telepathica Pacifica Network. He’s about to fall in love with a potted plant.

The Tale of Jonah (for Shark Week). 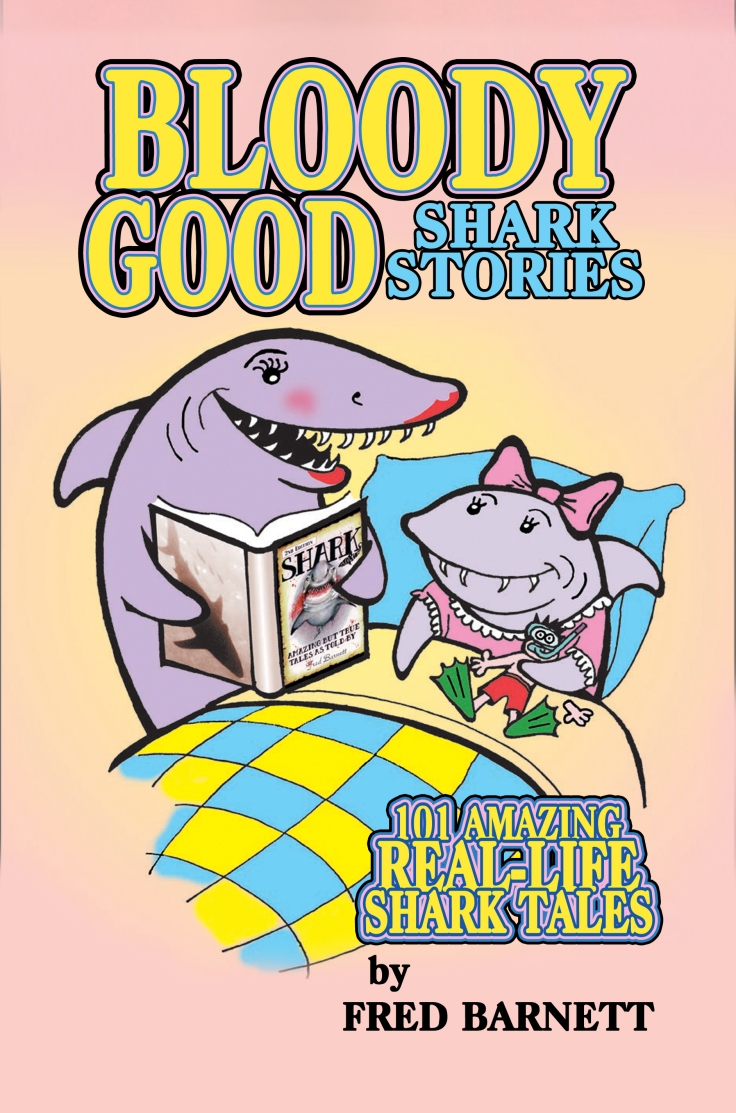 …..They continued to pray, and finally, after ten more lovely coeds drowned, God stopped the storm. They then threw Jonah, the  party pooper, overboard.

Jonah immediately fell into the open jaws of the “fish.”

Miraculously, after tree soggy days and three glorious smelly nights in the great fish’s belly, the prophet was spat out alive (and whole), which may have been due either to Jonah’s legendary lack of personal hygiene or near-constant flatulence.

The predator was first assumed to be a cetacean (i.e. a whale, a mammal). It was most likely a shark… and a shark of that size was probably a White Pointer (i.e. Great White).

Sharks can turn their stomachs inside out (yeech). expelling foreign objects, such as prophets, whole!

“We do know that most of this tale is true, though the facts may not be ‘written in stone,’” said our editor Mr. Hezekiah.

SHARK STORIES is not the typical book one encounters at the school book fair, say next to the ones about dinosaurs and the solar system. For that matter, neither is the book’s author Fred Barnett the sort who might monotone on about dorsal fins and the like at the same function.

No, Virginia, this is not your typical National Geographic offering on sharks and Fred Barnett just might be channeling both cartoonist Gary Larson and gonzo-journalist Hunter S. Thompson.

His publisher describes him thusly:

“Fred Barnett has been a professional underwater videographer, joke writer, performer and musician, wood carver (hellotiki.net), music and marine science instructor, and a cartoonist for the Garden Island Newspaper in Hawaii. Mr. Barnett’s previous works include two videos, Hawaiian Reef Fish Madness and Hanauma: A Day at the Bay, two music albums and one CD, Souvenirs, with Wiki Waki Woo, and two books, The Complete Humu and Silly Songs of the South Seas. His first full-length novel, Shark Fin Soup–A Tale of Shark Gods, Cannibals, Mad Cows, and Endless Love, he promises, will be completed and released at some point in the 21st century. Mr. Barnett claims his “real life’s purpose,” as revealed through recurrent dreams, is to feed his two cats. He was born in New York and raised in the sunny state of California. He currently resides in Kailua, Hawaii, with his wife, Jan-Joy Sax, and their two cats, Maui and Felicity.”

The publisher’s description of the book is perhaps a bit more modest:
“A rollicking adventure through time and the seven seas! Hundreds of fascinating TRUE facts and TRUE stories about our most famous denizens of the deep. “Fisherman arrested: Used wife as Shark Bait!” “Aussie Loses Same Leg Twice!” “Mako Attacks Fisherman On Beach!’ “Mom Eaten in Front Of Husband, Son and Six-Year-Old Quadruplets!” “Killer Arrested After “Monster” Spits out Murder Victims Arm.”

Imagine all of that for 10 bucks, plus a Bud Spindt cover illustration!

Who says we’re in a recession?