“I wouldn’t call them crop circles,” said the Queen Mum to her butler, who waited patiently outside of her golden W.C. as she finished up her three hours of ‘morning business.’

During Buddy and Ada’s Liverpool “spill” where the two aliens had lost most of their songs, the Brills hovered their ship The Lollipop above the village of Hangover, on the open farmland near Stonehenge, in the county of Wiltshire, on the Salisbury plane.

The night before they landed, Buddy was busy drawing giant shapes across the English countryside as though the wheat fields below were his personal Etch-A-Sketch.

Some of Buddy’s sketches were more than a quarter mile wide. He designed the patterns on the ship’s computer and then precision cut those images, using the latest laser beam technology.

At two a.m., a distinguished gap-toothed mustached old duffer, wearing a bowler hat, was on his way home from the Laughing Gravy Pub. He pulled his Bentley over to the side of the road that faced his family’s Ancestral Castle upon his vast Capersmithshireton Estate.

Something exciting was afoot in the fields below. His Lordship quickly grabbed his fine hand-tooled leather attaché case from motorcar’s passenger seat. Inside the case were his thermos, and a brand new brass fox hunting pistol. He removed his bowler hat and replaced it with a more appropriate deer stalker. Lord Joseph furtively tiptoed down the slope to investigate the strange lights illuminating the wheat fields below.

In the field, on his property no less, also stood what looked like…

“Pip. Pip,” he said while twirling his handlebar mustache.

“It must be the Princess’ idea of making merry,” his Lordship quipped. “A jest, I’m sure!”

“I’ll sit on this jolly old stump, pour myself a hot cup of tea, take aim at the doodad-thingamajig with my pistol, and give myself a bit of a respite! Simply smashing!”

Capersmith stopped shooting when an invisible hand pulled back the window shade on the ship. “Something” inside the space ship struggled and cursed while trying to open the window on the front of the giant juke box. Dried paint had glued the window sill shut. Before Lord Joseph could say, with a stiff upper lip, “Oh bugger,” the window shot upward, and….

Ada restored the tranquility of the spacecraft when she respectfully presented His Lordship with a formal printed invitation:

“A Night To Remember

Location: The Probing Pub of the Lollipop Space Craft

Hors d’oeuvres and Cocktails at 8 p.m.

The Night of the Shining Domes

The Night of the Shining Domes 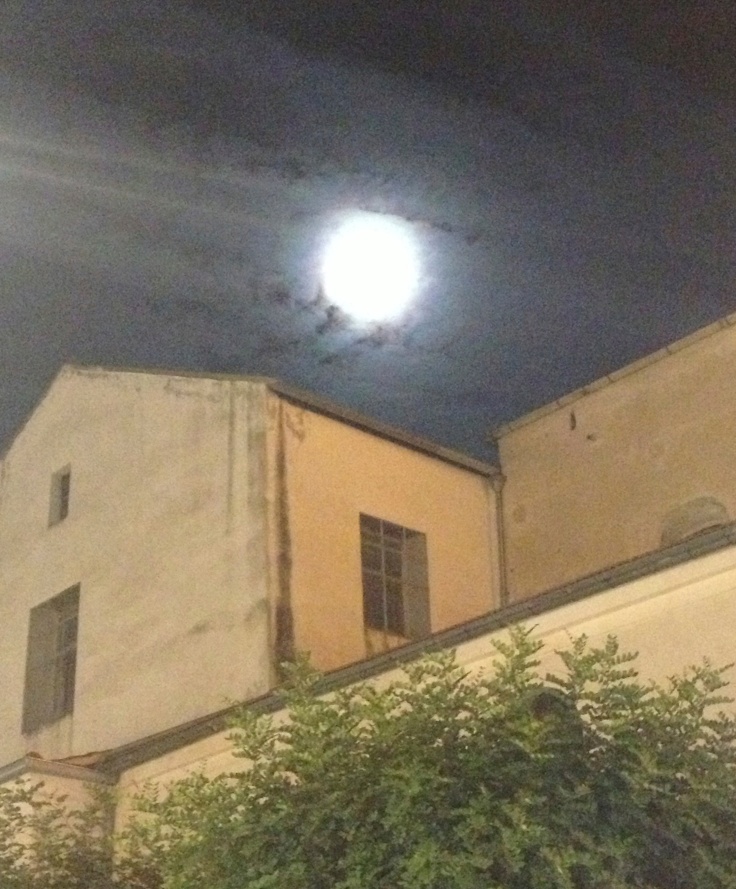 Where does inspiration come from?

Here, it takes the long route.

Our main character in the story Rock Invasion, is Johnny Passion: A washed-up 1960s pop singer

Second, we have Therpsicore: The newly elected Goddess of modern music and Johnny’s biggest fan. Working on giving him a second chance. We’ll call her Cori, for short.

Then there are The Brills: Cori’s alien song writing partners who inhabit the planet Brill.

It was the biggest, brightest full moon that the Earth had seen in over thirty years. The kind of moon that inspired love songs.

Eight tuxedo-clad ghosts solidified themselves and gathered, at midnight, in the empty baseball field of Dodger Stadium under remarkably clear skies. The Stadium was built in 1962. The Elysian Fields where it stood had been named by the Pantheon of Greek Gods in 5000 B.C. The local LA politicians, who would have named it for one of their rich cronies, had, thank the gods, nothing to do with the naming of the sacred space.

The ghostly group was a collection of the most talented of the deceased, bald show-biz legends. There was Bing Crosby, Fred Astaire, Bobby Darin, Roy Orbison, Hank Williams, Mel Torme, and Al Jolson. They walked the diamond in a slow orbit around their chosen leader, the chairman, the venerated spirit of Francis Albert Sinatra, who stood on the pitcher’s mound holding a ghost cigarette in one hand and his cocktail of choice — four ice cubes, two fingers of Jack Daniels, and a splash of water in the other. Frank was wearing his magic toupee. Other curious follically-challenged spirits began to drift in from the night to witness the rare and momentous occasion. Two dozen, daisy pushing, songwriters, and band leaders joined the festivities, as well as two accursed showbiz agents, from the Earth’s molten core; Max and Lenny Lipschitz — the twin Lex Luthors of Hollywood.

When they had been alive, each of these tuxedoed giants of music had sported one of Cori’s magic toupees. Cori’s charmed hairpieces, were woven from the fur of the her long haired cat, Mr. Snuffles. When they were alive the magic toupees had helped the stars boost their fragile egos so that they would keep performing.

The Domes held their charmed toupees against their chests as they tightened the circle around Frank. The tops of their shiny heads pointed toward the heavens.

The solemn ceremony had begun.

The pale rays of the silent moon multiplied themselves upon the ghost’s polished heads until the moonlight snowballed ten-thousand-fold. A vigorous single beam, more robust than any laser, ricocheted itself back to the dark heavens. The signal was sent.

They set their wigs back upon their heads.

The toupees were lifted and slapped down repeatedly , over and over again, upon the bare heads of ghosts in quick, efficient military precision. The flashing of domes was repeated thirty times. A coded message was being transmitted into the great beyond.

The Chrome Domes had sent their urgent message to star system LSMFT-456. Hundreds of light years away, on the distant planet Brill, the beam entered the studio window of Cori’s two writing partners, Ada and Buddy Brill. The signal from the Chrome Domes was a plea for action, reaching into deep space.

“The Chosen One is ready.” The coded message said. “Please ask Cori to weave a special toupee for our new inductee, Johnny Passion.”

Johnny Passion, the washed up pop star, was about to be given a second chance at showbiz, thanks to his number one fan, the goddess Cori.

“Toupee or not toupee!” The ghosts chanted as they dematerialized back into the endless night.

The message from the Chrome Domes had been given top priority by the Brills, Buddy and Ada, who lived and worked on their tiny 24 Karat planet beyond the Milky Way. The Brills picked up their Buck Roger’s Walkie Talkie to relay the exciting message to Cori, who waited for the Chrome Dome’s approval back on Earth. Frank and the boys, giving Johnny the green light, would certainly lift the goddess’ spirits. Johnny Passion was Cori’s last hope for the renaissance of quality music.

Cori’s walkie talkie buzzed again and again, but there was no answer. The Goddess, protected by her gallant feline, Mr. Snuffles, was passed out, drunk, on the floor of her favorite watering hole, the Kailua Palace.

“It takes a child to Raze a village”

“It takes a child to Raze a village”