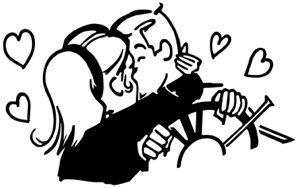 They had met in a head-on crash. Terry and Bobbi Jo had been jettisoned through the front windshields of their respective cars, smashed into one another in midair and died face to face on the rough, wet pavement. Rather than die alone, they had reached out to one another. Their cooling hands intertwined, forever bonded on that lonely country road.

Both had been speeding: Blame it on youth.

Both had been texting: Blame it on technology.

Both had been sipping beers: Blame it on the alcohol.

Both had been scanning their radio dials: Blame it on rock ‘n roll.

The roads were dark and slick: Blame it on the rainy night.

There was a ballet in midair when Terry and Bobbi Jo’s bodies collided, mangled and tangled. They’d almost reached their goal, the perfect melding of flesh and spirit that the two teens had been working toward. They were splayed out only a few yards north of the wreckage, among a glistening field of glass and burning debris.

“We have to stop running into each other this way,” said Terry, who was always the class clown.

“Sirens. Grab my hand, Bobbi Jo. The response time is quick today. I have to admit, I called in the crash ten minutes ago on my way over to Highway 95 and Cedar Lane.”

“A ten minute warning? Fucking with their heads. That sounds like you, Terry. Do you think that anyone will catch on to our routine?”

“Nah! Before the light fades from your beautiful eyes, Bobby Jo, I want to give you new flowers.”

“Awwww thanks, Terry.” Blood spilled from her lips onto the pavement as she mimed a kiss. (cough, cough) “You brought me white roses this time. They’re beautiful. I’ll…I’ll see you at the funeral. I hope that they can bury us closer this time.”

“Poor thing. The flowers are still in her hand. Love at last sight,” said Don, the older of the two highway patrol officers, walking around the wreckage in the rain. “The girl’s car is still running. I can smell smoke from the burning rubber. This just happened.”

“I’m so tired of this spot,” said his young partner Christine. “Are they ever going to put some lights out here?”

Don shook his head. “Yeah. Another one. I feel like God is a seven-year-old boy who gets off by watching shit blow up.”

“This is so wrong,” she said. “Someone called this accident in. The boy must have been bent on suicide.”

“He was hell bent on killing himself and others as well. There must be a registration in here,” Don said as he searched though the glove box.

“Maybe it was her idea,” said Christine. “They both had to be going over a hundred to do this.”

“I hate this damned Dog Park Road,” said Don. “In less than five years we’ve had half a dozen bad accidents at this intersection. Each time, bodies were launched through windshields.”

“Her name is—was Barbara Jo Murray. Poor thing,” said the young patrolwoman as she held the girl’s wallet taken from the spilled purse. “Those flowers. She must have been coming home from a date. What is it about the name Bobby Jo that bothers me, Don? Do you remember, a few months ago, when some creep was stealing flowers from the graves at Acadian? I was there when they found the pile of vases and stems on a grave of another Barbara Jo—Barbara Jo Massey.”

“A few of the young female victims on this road were named Barbara, Bobby, or Bobby Jo. Our boy was Terrence Lazarus, age 18,” said the patrolman holding the boy’s registration.

“What? What are you thinking?”

He looked up at Christine through the rain. “Jesus told Mary of Bethany, ‘Your brother, Lazarus will rise again.’”

“Enough! You’re creeping me out, Don. This is one time that I hope you are full of shit.”

“I wish they’d scoop us up and get us out of here already,” said Bobby Jo.

“Maybe next time we can get really mixed up,” said Terry.

“Mixed up? You’re talking about more than just holding hands.”

Bobby Jo laughed. “They won’t know what belongs to who!”

“We’ll be totally together, babe! A tragic teenage romance!”

She loved how Terry always made her laugh.

“They’ll have to hose down the street.”

“Just wait. I’ll get us faster cars, next time.”

2 thoughts on “Terry and Bobbi Joe.”