Dauna Heads for the Mainland 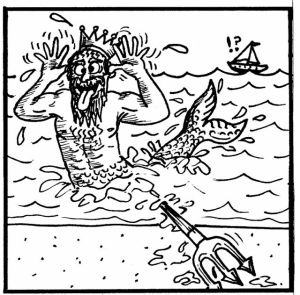 Dauna, in mermaid mode, felt the stranger’s shadow looming above her on the beach, but kept herself still.

Even ‘it’s’ shadow smelled bad. The disgusting thing was standing behind her, trying to … A net?

Yes, a net. Captain Bill suddenly threw a heavy section of fish netting over her head, and with compulsory drooling, he began to run his hands over the rest of her still half-fish body. He began calling her “his prize” and “his fortune.” He squatted next to her with the intent of lifting the sleeping mermaid into his boat.

She was dead weight, and he was too drunk to budge her.

“Damn! Well, what doooo we have here?” Bill whispered in her ear. “I’ve been following you, my fine little filet. Your boyfriend Mr. MacHeath, told me to look after you! I should take you home with me, and stuff you.” He began to stumble backward but managed to stay standing. “Maybe I’ll sell you to a fuggin’ museum.” Bill was trying to unzip the button fly on his pants. Wait a goddamn second, babeeeee. How do fuggin’ mermaids make wookie, anyways?”

Before he could jam his filthy hands into the sand beneath her human breasts, Dauna’s scythe-shaped tail swiftly raised itself from the sand and sliced off Bill’s pickled head. The graceful tail quickly transformed into shapely human legs. She stood and tossed the net aside. Take a breath Dauna.

Fully human now, Dauna checked out her fine bod in the reflection of Bill’s sunglasses. The nap had done wonders. She put the. Captain’s glasses on, stripped him of his shirt and pants, slipped them on and dragged the headless body across the sand, back to The Kegger. Eighty-proof blood poured from the man’s throat like a spigot. Dauna, a five-foot-four powerhouse, lifted the fisherman’s body by its feet, smashed it against the side of the cabin and spilled the remaining guts on the deck. — All this before Bill’s pickled, brain, bobbing jauntily in the shore-break had a chance to spark its last.

Dauna tossed the head onto a pile of rocks for the harbor seals to play ball with. She sliced and diced the captain with an axe she found aboard and fed the bite-sized chunks pieces to the starving tuna imprisoned in the vessel’s hold. In the crowded tank, over a dozen large fish swam in patient circles around Bill‘s cold beers.

“Let’s have lunch!” Dauna said, tossing scraps and drinking a beer. “Sorry I couldn’t give you something better. Don’t get too drunk off of CAPTAIN FUCKFACE! And before you go home, pick yourselves a designated swimmer.”

Bill’s excess trimmings were tossed overboard for the crabs. The moment that the tuna were done eating, Dauna released her blitzed, but satiated new friends back into Mother Ocean.

“The word ‘dispatch’ came to mind. I like that word. I just dispatched that two legged pile of detritus! Dauna downed a beer screamed to the heavens, “Hey MacHeath, you asshole, wherever you are, I just killed your SCHEISSE FUR GEHIRNE (shit for brains) captain! Just call me the FUCKIN’ DISPATCHA!”

Dauna fired up The Kegger’s engine and swerved in the direction of LA and destiny.

Fish often “vocalize” through a series of body movements and grunts.

That night, the school of stewed tuna belched, “I love you, man,” to their buds — between bouts of blowing gastric chunkage. The dudes didn’t seem to care that their freakin’ heads would be pounding major ass the next morning.