A Halloween Classic! Bats ^^ö^^ Episode: Cruising with the Vampires

The group had been making fun of the countess’s giant fart that had just destroyed half her castle. 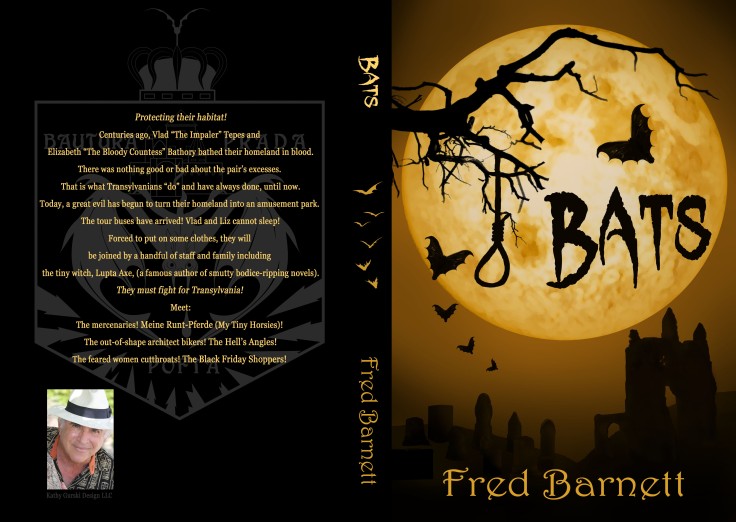 Elizabeth steered the car back onto the pavement.

Jonathan, who had begun napping, suddenly looked back toward Mina. “Pass over the guitar, Mina.”

Lupta the witch shouted out, “Jonny, do you know ‘Blowin’ in the Wind?’”

The car jerked to a halt. “Motherfucker! That’s it! I’m gonna destroy that desiccated stick of jerky!” Elizabeth meant Lupta.

“You! You wi-atch!” Two bolts of lightning shot from the Countess’ black pupils, bounced off the rearview mirror, and set Lupta’s dry haystack of hair on fire.

“Jonathan?” asked Vlad D. Impaler, “My son, vhen you perform music, do you ever take requests?”

“Of course I take requests, sir.”

“Then shut the FUTE up!” said Vlad.

While the Countess raged, her car narrowly sideswiped a mummy enjoying a foot-dragging stroll near Astray Trail.

Kharis, the mummy, loved his midnight shuffles, which usually culminated in vengeance upon British scientists and his one good hand squeezing the throat of the reincarnated Princess Ananka, who dared to reject him.

“Jackals! Mummy fuckers! Osiris damn you!” screamed the enraged Kharis. Startled, he had dropped his challis of tanna leaf tea. “Delincvenților minori! (Young punks!)” he cursed and pointed his amulet ring at the car as it passed. “Taco wagon!” Disgusted, the mummy tried to resume the slow, easy pace of his evening shuffle.

Dino the wolf howled toward the moon above. (“We saw a mummy, and we have had five hundred miles of open window!”)

Elizabeth pulled a screeching donut in the middle of the highway at ninety miles per hour until she spotted the sluggish mummy crossing the highway. “Taco wagon, huh!” said Elizabeth as she slammed into old gauze-face and watched him unravel for over a quarter-mile along the double yellow line.

At 1 a.m. Sinatra’s “Summer Wind” began to play on the car radio—to the Countess’ obvious displeasure (another fart joke). “Change the station! Now!”

Elizabeth had had enough guano for one night. Her rage was suddenly broken, when above the loud music, a loud knocking came from the rear of the car.

“What in blessed heaven?” cursed the dozing Jonathan.

“It’s your housekeeper,” said Vlad. “She might be lonely, stuffed back there. Maybe she’s hungry. You better pull over. Zombies are God’s monkey wrenches to be thrown into the machinery vhen things seem to be running smoothly. Full of surprises.”

Lupta blurted out, “Like a whoopie cushion?” Vlad shot her a glance and shook his head. “Ixnay on the artfay.”

Frankie Lane’s “They Called the Wind Mariah” blasted from the radio. Luckily, Elizabeth didn’t hear Lupta’s comment as she steered onto the shoulder and stopped. “Open the trunk, Jonny boy!”

She threw Jonathan the keys. He jumped out, and stood back as he flipped open the trunk. Elizabeth reached for her pistol from beneath the front seat and got out. The rest followed. The light from the trunk shone on Mina as she stood guard with a hammer, a machete, a wooden stake, and a small round hand mirror in case there was any funny business with the zombie.

“Son of a bitch!” said Jonathan. “Elizabeth! A gun? I thought the miserable woman was dead.”

Elizabeth took a breath, relaxed her shoulders, and lifted the pistol. “Like Vlad said, ‘It’s only murder if they stay dead!’ Right? Remember when we had to do this to Billie Bats?”

Jonathan grabbed her wrist. “Wait! Don’t shoot the face! She’s got a big date with Huthbert.”

“Let her rest in peace. She’s dead enough,” said Vlad. “Do you feel better now? Ve need to get back before sunup.”

Willowy Mina gently removed the gun from Elizabeth’s hand and took out a hand mirror. The radio was playing “Killing Me Softly” by Roberta Flack.

“Mina darling, can you still see your reflection?” asked Elizabeth who was trying to catch whatever she called breath.

“No. But I can see Penelope behind me.” Mina faced away from the trunk and held up the small mirror, took aim at Penelope, and continued to empty two more rounds into the dismal rotting thing.

“Nice shot, Mina!” said Jonathan. “You finally hit something that you were aiming at!”

“You should talk, Mr. I-Don’t-Need-To-Put-The-Seat-Up.” Mina handed the gun back to the Countess. “Zombies are like inflatable punching clowns. Let’s go kill something alive. I’m ready for fast moving targets. I need more points.”