Boldizsár, I Came to Kick Your Bony Ass. 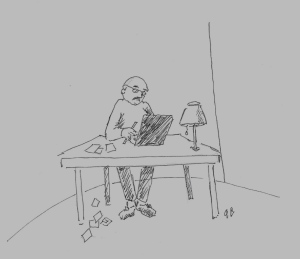 “Boldizsár, I Came to Kick Your Bony Ass.”

Because of Laszlo’s large skeletal bald head, which appeared on the back cover of all his novels, Laszlo Toth was easily recognized by his legions of fans. Though Laszlo became famous by writing about the supernatural, he based his novels on fact and prided himself on being a rational man.

Laszlo did believe in science and while studying genetics for his new novel became involved with the a group called blameyourancestors.com. Within two weeks after sending their headquarters a DNA sample he discovered he was 87% Hungarian and, apparently, 13 % cheese, citing a few stray genetic threads to Luxembourg, Switzerland and four other cheesy countries.

Thanks to blameyourancestors.com, Laszlo was also able to narrow his search back to his Hungarian family, the Tóths. After a little bit of digging, he discovered a recent family portrait. The Tóths all looked ‘polished,’ like Laszlo. Cueballs. Melon heads. The men, women and children all suffered from a severe form of early male-pattern baldness (androgenic alopecia). 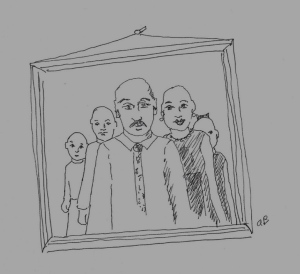 Laszlo sent more money to expand his DNA search and soon received the results that he’d been hoping for. The ‘bald problem’ that plagued his life was traced back to a —  singular —  human —  monster, Count Oszkár Tóth.

During the 16th century, Oszkár ruled Walachia and was known for his long-flowing locks that made him look like a golden hero on the cover of a bodice-ripping romance novel. The vain Oszkár combed his proud mane day and night. One evening he summoned his magic golden comb only to find out that it had been stolen!

Oszkár’s spouse, the beautiful countess Cynthia, told her husband that she had seen a well known local magician, Madik, running away from the castle and into the Nagyon (Very)  Sotet (Dark) Forest carrying a shiny yellow object in his hand.

After apprehending Madik, Laszlo ordered the Magician to be burned at the stake. At the Barbecue, Laszlo, himself, was cursed by the magician’s wife, the powerful witch, Eegahd.

The next morning, while Oszkár combed and combed, his glorious mane began to shed. The hair that made the count ‘such a wench magnet’ alllll fell to the ground.

As a result of Eegahd’s curse, all of Count Oszkár’s children, male and female, became bald as well; that is until in October 31, 1712, when the entire clan were tortured, murdered, dismembered, and turned into a savory paprika goulash by a nomadic Gibor hoard.

Only one Tóth escaped the massacre, the youngest noble in line, Boldizsár, who continued to selfishly spread the Tóth family curse throughout the western world.

“Fiend!” cried Laszlo. Tendrils of revenge worked their way into the author’s rational mind. Online, he hired a Hungarian scholar, János Harker, to help him track down Boldizsár’s resting place. That is when Laszlo made the first irrational decision since his seventh marriage, to visit his cursed ancestor’s crypt and ‘kick his bony ass to Hell.’

The following October, before the frost set in, Laszlo made his trip, alone, to Walachia.

Unfazed by local superstition, Laszlo arrived ten minutes before midnight at Tóth Citadel in rural  Ploiești. He quietly drove his rent-a-car around the back to the cemetery, parked, opened the trunk, and removed his new Road Rager Crowbar.

Laszlo found the rusty cemetery gate open, and by the light of the full moon, jimmied his way into the Tóth Mausoleum. Once inside, he lit his lantern, shooed away the vermin to begin his unholy undertaking. Laszlo located Boldizsár’s resting place and slid the heavy lid off the ancient stone coffin.

Jubilant, he dragged the Count’s loosely connected skeleton outside among the gravestones.

Laszlo kicked Boldizsár’s bony ass all over the churchyard until he could kick no more. After a short rest and a drink from his flask, Laszlo dragged the broken Boldizsár parts back inside the mausoleum, dumped them back inside the coffin and took a selfies, one   in front of the inscription on the wall above the sarcophagus:

Laszlo, satisfied with the bony ass kicking, didn’t review the inscription on the photo until he arrived back home in the states. Something had changed. In red letters, his name had been added to the wording :

“I may be dead, Laszlo, but you’re still bald.”

One thought on “Boldizsár, I Came to Kick Your Bony Ass.”